Pretty much every year, a group of college students decides it’ll be a swell idea to host a party where people dress up like minorities by, among other things, donning some good ol’ fashioned blackface and sometimes a grill or two. 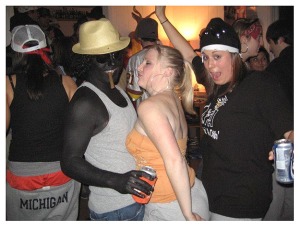 Just a reminder that these people were all making active choices.

Just today, we learned that sorority sisters at The University of Southern Mississippi were put on probation after they decided to dress up like the Huxtables. (Argyle and wigs were not enough, natch, they had to go whole hog).

Earlier this year, students at Université de Montréal donned blackface for a presentation in their business class. 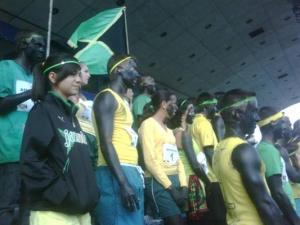 Last year, students at the University of California, San Diego hosted a “Compton Cookout.” The invitation to that party went a little something like this:

“February marks a very important month in American society. No, i’m not referring to Valentines day or Presidents day. I’m talking about Black History month. As a time to celebrate and in hopes of showing respect, the Regents community cordially invites you to its very first Compton Cookout.

For girls: For those of you who are unfamiliar with ghetto chicks-Ghetto chicks usually have gold teeth, start fights and drama, and wear cheap clothes – they consider Baby Phat to be high class and expensive couture. They also have short, nappy hair, and usually wear cheap weave, usually in bad colors, such as purple or bright red. They look and act similar to Shenaynay, and speak very loudly, while rolling their neck, and waving their finger in your face. Ghetto chicks have a very limited vocabulary, and attempt to make up for it, by forming new words, such as “constipulated”, or simply cursing persistently, or using other types of vulgarities, and making noises, such as “hmmg!”, or smacking their lips, and making other angry noises,grunts, and faces. The objective is for all you lovely ladies to look, act, and essentially take on these “respectable” qualities throughout the day.

A few years ago, word got out that students at Tarleton State University, University of Connecticut School of Law, Clemson University and the University of Arizona all threw ghetto parties on Martin Luther King Day. 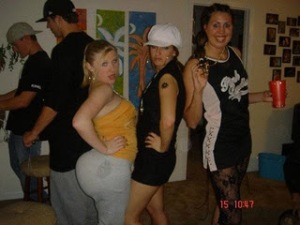 It seems that like prostitution and casual drug use, these peccadilloes are here to stay. So instead of trying to legislate morality into students, maybe we should take a cue from the Libertarians and give everyone some guidelines on how to party like it’s 1849 without risk of disciplinary action. It’s like learning how to have safe sex…assuming that by “sex,” we mean “really terrible party ideas that the future leaders of our country maybe shouldn’t be coming up with.”

So here are some Dos and Don’ts for your next ghettotastic shindig.

What other tips do have for getting away with pretty offensive behavior? What do you think of these parties? Have you ever been? When’s your next one? Can I come? Let us know in the comments!