Happy start of summer! And welcome back to me. If you’re wondering where I’ve been, I can tell you (and not because I just visited my own Oreo Excuse Generator) that I’ve just been super swamped prepping for a Tom Stoppard Exhibition and this really great Castle Con.

(Also, just saying… my last entry was about how I finally made a black friend, and then suddenly the blogging stops. Coincidence? There are no coincidences my friends. Only war!)

Now that I’m back, what better way to kick of the beginning of Florida’s polo season than with a bit of nostalgia.

Last week, American Girl (making pretweens lose their minds since 1986) announced that it was discontinuing 4 of its historical dolls, 2 of which are of color. Cecile, who is African American, and Ivy, Asian American, will be going to American Girl Doll Heaven, leaving 7 dolls in the AG lineup. Including only one black doll. …who is a slave.

Okay, fine she’s a former slave, so that’s good. She got out.  But whatever, part of her story involves being whipped into submission, sold for her womb and potentially being used for gynecological-related live science experiments.

The specifics of her history might matter less, except that a big part of the American Girl doll experience is the book that comes with your Girl, which tells about her life up until the point that you got her. I’m sure they leave out the R-rated bits, but that doesn’t mean they’re not there.

..oorrr, maybe the details are there in all their gory detail. Yikes! Well, that’s a choice for a bedtime story

(Also, these dolls cost $110. One hundred and ten dollars!! For ONE doll?  That’s 4 VIP tables at Empire Polo Club. Or like 30 Oprah Chais, which is the blackest thing I’ll admit to doing. For real, though, those things are yum! )

I only have one wish for slave Addy.

I wish that I knew about this brand when I was a kid and buying dolls! (read: making my parents buy me dolls!) This situation would have made my doll buying experience so much easier!

The one year or so I was into dolls was pretty rough. All I wanted was a blonde- or red-haired doll with long straight hair and freckles and a name like Allison or Brigita. Not too much to ask for. Every one of my friends had one, why shouldn’t I? 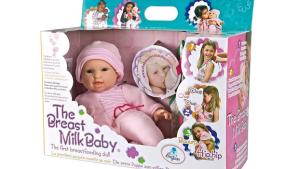 There are worse things than wanting an aryana looking doll. Like wanting this one. It breast feeds. On children.

Anyway, all I wanted was for my doll to blend in in a way that I never could. Isn’t that what playtime is about? Indulging a kid’s fantasies about who they could be one day? Allowing them to dream about what beautiful person they might grow up to become? Giving them a little taste of vicarious happiness?

I knew from an early age that what doesn’t kill you gets you invited to better parties, so at age 9, assimilation was the goal. And I might have done it, too, if it hadn’t been for those pesky Cabbage Patch Kids!

See, if all I had to work with was American Girl dolls then my parents would never have let me have a toy that was also a slave. But since CPKs had one regular ol’ Cabbage Black Kid, that was my option: Black doll or no doll.

I remember the standoff in the store with my mom. The Toys R Us aisles loomed huge above me. And atop them, my Ginger Princess. So far out of my reach.

My mother stepped into frame holding the baby power smelling yard-headed monstrosity that was the “diverse’ CPK.

This doll or no doll.

“Fine,” I said after what felt an hour of almost passing out from the strain of so much defiance. “I’ll get a Pound Puppy instead.”

She still made me get the brown one.

What were your favorite childhood toys? Did they reinforce your desires to be someone else? How did you negotiate this with your family? What do you let your kids play with today? Do you think American Girl doll should keep the diversity, or are we giving Slave Addy too hard of a time?