Fair warning: Some gross bodily function stuff ahead. But it’s led to the happiest news this Oreo has gotten in ages.

But about a year ago, things started to get different. They started to get wrong. Not just “Like-any-good-American-woman-I’m-subjected-to-impossible-versions-of-photshopped-beauty-every-day” wrong. But more like: “Ummm-Why-do-I-look-5-months-pregnant?-No-seriously.-I’m-not-being-hyper-sensitive,-my-belly-is-effing-distended-slightly-beyond-capacity-and-it-hurts-like-a-mother” wrong.

Holy God, I don’t know what’s inside me doing this, but I can think of about a billion things I don’t want it to be.

Like any good American, I waited about 10-18 months to go to the doctor about this painful thing.

When one day I was in too much pain to stand upright at work, I rolled my bloated self to a professional and asked him what the fuck.

He poked and prodded and listened and squeezed and said he was going to do some blood tests.

He summoned the nurse who was going to be tasked with peeling my ass off the ceiling while she tried to put a needle in me and started to walk out of the room. But then he turned and said:

“Hmmm. Both your parents?”

Why was this guy such as asshole? Making me cop to crimes I have tried so hard to erase??

“Well, there’s a test I could run. But it only affects people of Scandinavian ancestry.”

An unexpected ray of hope!

“Funny you say that. May dad actually has some condition that I’ve heard usually only affects Scandinavians.”

“Yeah. I don’t remember what he has, but I’ve had this conversation before.”

While I was perturbed that he was so excited that he could draw additional blood from my precious precious veins, I was glad that I got to pretend that for one moment, I was Northern European.

A week later and I get this message:

“Hi Aydrea. I need to talk to you about your test results.”

Okay, doctors. Never say this shit. Just leave a vm that says that the mole is definitely cancer or the sneeze means I totes have AIDS or whatever! Screw HIPA. Just tell me what the fuck is up.

I go back to the office expecting terrible news. But instead, I get the best news of all.

“I’m so glad I ran that test!” he said. “You have a wheat allergy that we usually only see in people of Scandinavian descent.”

He then went on to say what was possibly some useful shit about what I should and should not be eating and how I should take care of myself and how to avoid the blinding belly pain I feel every single day. But I couldn’t concentrate. Because I. Am. Officially and medically: WHITE ON THE INSIDE!!

Holy God, it worked! All I have inside me is white goodness!
(and not in a sexy way, you pervies!)

December brings a lot of opportunities to celebrate. But as an Oreo, you have to make sure to pick the right one. Choose correctly, and people will ignore your ethnicity for another month or so. Choose poorly and you might as well have your face melt off like you drank from the faux cup of Christ.

Here is a quick Oreo holiday guide. Feel free to take the advice and also leave your own!

Sinterklaas Day – We just missed the actual day of celebration, but that doesn’t mean you can’t catch up this weekend. All you have to do, is get in touch with your Dutch roots and put on some blackface while you pretend to be one of St. Nick’s helpers, the Swaartepieten, and leave gifts in shoes on the doorsteps of your friends and neighbors.

Hanukkah – Replete with rules and song in minor keys, Hanukkah is a  great choice for an Oreo. True, there are more black Jews than people think (not just half-looking at you SDJ), but that’s the beauty of it. No one knows! So grab your dreidel and always bet on Gimmel.

Solstice – Nothing like worshiping the sun to show that you’re not afraid of what it can do to your skin. (but really, the sun is dangerous, make sure you’re well-oiled before you get even tanner!!). Plus, when people think of Solstice, they think of Athenians and Wiccans and they rarely think about the browns. Bleaching by association!

Christmas – Totally fine to celebrate Christmas, but don’t be swayed by the diversity now seen among Santa standees and manger scenes. Sure a dark-skinned Jesus makes more sense than BlueEyes McPaleChrist and Santa isn’t real anyway, so what does it matter what he looks like. But c’mon. This is Christmas–a time to hope and dream for the best. And the best is not brown.

Also, keep Christmas dinner to old school fare – figgy pudding, spotted dick, ladies in bonnets, deference to the Queen. We all dream of a White Christmas after all.

Boxing Day – This is a perfect holiday for anyone to celebrate, frankly! You don’t really have to do anything, but it sounds so adorable and Anglo to say!

Kwanzaa – Really? Really?! Don’t even joke about that. We’re just going to pretend that it never crossed your mind. Just walk away slowly before you embarrass yourself any further. 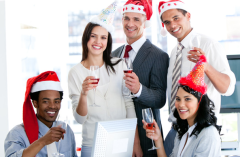 Con’t be afraid to crop out dark spots in your photos.
(source)

With the end of the year comes a host of potentially awkward situations for an Oreo: office holiday parties, obligatory shindigs thrown by vague acquaintances, family dinners, the lack of new Shark Tank and Kitchen Nightmares episodes.

Not only is the Oreo forced to make make-believe merry with people who also don’t want to be there, but she or he might get stuck talking to another of color, or worse, an RBP. In some cases, an Oreo might find herself in the extra sticky situation of having to introduce another melanin-rich individual to someone else. Or worse, they might be introduced to a black person by a malicious member of their blanchetourage.

Here are some steps you can take at your next party to make sure that everyone knows you’re only shaking this person’s hand to be polite.

Mispronounce their name. Nothing says that you just don’t give a shit like the mispronunciation of a name you just heard learned. If you’re meeting a Michael, try calling them Michelle, La-Michael or Quantas to make sure no one thinks you’re friends. Adding an “accidental”  “La-” a “D'” or a “-eesha” to the beginning or end of most names will make them sound super black and thus allow everyone to recognize how little you think of this person. It will also draw attention to their darkness and keep people from looking at yours.

Look Away. Whether you look just above their heads, to the left or right of their ears or bury your face in yours or your neighbor’s purse, keep yourself from locking eyes with the Other. You don’t want them thinking that they can engage you in further conversation or steal your soul–which they will do.

Accentuate the negative. This will highlight your own accomplishments as well as ensure that mutual friends will try to keep their distance, which in turn, will help you keep yours. Try saying something like:

With phrases like these, you’ll ensure that the conversation will be brief and your humiliation bearable.

No touch. While you may not be able to get away with avoiding a handshake, do not under any circumstances hug, kiss, tickle or sleep with this person. You’re dark enough. You don’t want that shit rubbing off on you.

For more tips and tricks for social situations, see below.

Click here to see how to deal with a white person who surprises you by suddenly sounding all black out of nowhere.