When I was about 10, my parents, in a misguided effort to instill some sort of ethnic pride in me, told me I was related to Booker T. Washington.

That would have been awesome had it not been a total lie. I am not related to Booker T. I am however, related to an actual hero—a fact my parents neglected to mention until we were literally standing in front of a picture in the Smithsonian and my mom more than casually said: “Oh, there’s your Uncle Andrew…Did you wanna get lunch?”

Turns out, my Uncle Andrew was one of the Tuskegee Airmen–the pilots who are the subject of George Lucas’s latest film, Red Tails.

This is him. As seen in the Smithsonian. Museum. You know, that big one.

Anyhoo, I had the opportunity to hear Lucas speak about this film months and months ago at work. He’s also been doing the requisite publicity tours lately and I caught his appearance on The Daily Show where he repeated a sentiment he’s been touting since I first heard him talk about Red Tails last year.

Lucas has been talking about how the big studios in Hollywood didn’t want to pay for the production or promotion of this film because it was an all-black action movie and they a) didn’t think it would play and b) didn’t know how to market a blacktion movie like that in the first place. 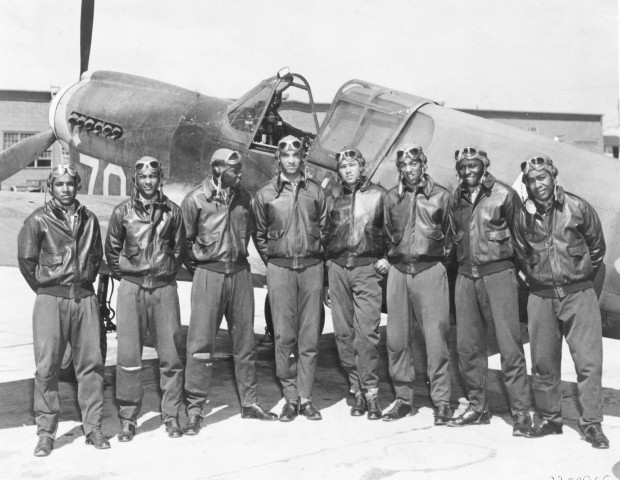 Not the droids they're looking for.

When I heard him say this, I was shocked!!

I mean, Lucas should have known better. Of course a movie like this is doomed! I mean, sure, it’s got huge, awesome fighting sequences, war, drama, amazing special effects work, a compelling not-yet-over-told story and nostalgia. But it also has black people in it. And as we’ve learned from movies like these, these, these, these, these and these, unless it’s a man in a fat suit, putting black people in movies just doesn’t make sense.

And Hollywood is totally faithful to its pattern of not putting out films with elements that have been proven not to work. Just look at some recent big budget flops.

Mars Needs Moms – In this animated, boy-centric, action flick based on a book of the same name, a chore-phobic kids goes a a planet where there are no women to make sure life doesn’t fall apart due to lack of laundry.

The Green Lantern – Ryan Reynold wears Spandex and saves some segment of humanity.

What’s Your Number? – Anna Faris believes she has had too much sex.

Conan the Barbarian – I’m sure this movie is about something, but I was distracted by the 14-pack.

Prince of Persia – Didn’t realize Persia was in the OC.

Clearly there are some things that just don’t work in movies. And that’s why there are only a few hundred movies coming out in the next few years that feature things like animation, white kids, motion capture, novel adaptations, superheros, white guys, New York, white gals, over sexed 20-somethings, contrived ticking clocks, singles who are totally oblivious to the fact that the person of their dreams is standing right in front of them, epics, horses, weapons, big CG crowds, Los Angeles and gigantic budgets.

Though all of those elements are consistently present in movies that do terribly, it’s really just good science to run a few more test cases just to be sure.

No need to figure that shiz out for black folks, though. Totally obvious they can’t make a movie work.

For an equally disturbing trend in TV, click here.

Are you related to anyone awesome (apart from your awesome self?). Do you wish you were? Tell us about your family history in the comments!

*Seriously, someone help me out with the Star Wars references. I’ve never seen the movies.