Fresh off the heels of the most prestigious of Hollywood award shows, the Oscars (this year, simply and dramatically dropping the “the” and going by “Oscar”), I’m excited 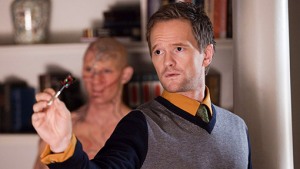 to start looking at this year’s movies and dreaming of all the things I could be…if I, you know weren’t so browny.

Movies are a great way to solidify your Oreo experience. The repeated images of certain types of people doing certain types of things really reminds us who we are and who we can…or probably cannot be.

Stuff Non-White People Do In this Movie: Well, there is one black guy in the trailer…he doesn’t speak and it looks like he’s gonna cut a bitch.

And seriously, New York movies, not even any of color extras?

***UPDATE – I just read in The Hollywood Reporter that Anthony Mackie has a “substantial” role in this movie. Why keep that a secret, trailer?

Stuff White People Do In This Movie: pull ups, look hot and talk about how hot they look, win the praise of the masses, have magical powers, live with a disability, beat the moral into the ground, look deeper, build greenhouses, like flowers,

Stuff Non-White People Do In this Movie: Well, there’s one at at table for a second, but she also doesn’t speak.

The best thing about this movie other than its anglo-tasticness, the fact that if this goes according to the story of Beauty and the Beast, the girl gets a SUPER HOT GUY in the end even though she likes him when he’s not hot…which means that the moral of the story is the beauty is still the ultimate prize. (oh, and douchebag guy still gets SUPER HOT GIRL after enduring a couple of bad days as a not hottie). Also, the dude doesn’t look ugly, he just looks like he’s really into bodmod.

Stuff White People Do In This Movie: Have overbearing parents, have unrealistic crushes, have crappy jobs, have silly shenanigans, breakdance, swim, dance badly, have adventures under the song “Straight Outta Compton,” let fear get in the way, help guys believe in themselves.

Stuff Non-White People Do In this Movie: Do not appear.

Why do I work so hard at being not-black???  Because as you can see, the not-blacks get to have such an awesome diversity of experiences!! So here’s the question…. if I do all of the above, will I finally ascend into whiteness? Or am I simply not eligible for the above?

And when cameras are rolling on these alabaster casts, do you think that the crew breathe a sigh of relief the way I do when I look around the barn during my dressage lessons? Or are they the least bit concerned that something’s gone…awry? I mean, with no people of color on screen, how the hell do you decide who gets killed first?

For a look at more movie trailer magic, click here!