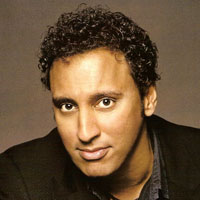 Aasif Mandvi – those eyes, that smirk, that ability to make people forget that their words are being broadcast to millions and that there are such things as “consequences”  – Yum!

In case you didn’t catch Thursday’s Daily Show clip that everyone is talking about, here’s the Reader’s Digest version: (Note to self: Find out if people still read Reader’s Digest)

Aasif Mandvi interviewed Don Yelton, a GOP Precinct Captain from North Carolina. During the interview, the two discussed voting rights generally, and more specifically, the fact that since the Supreme Court repealed part of the Voting Rights Act, North Carolina has done what it can to make sure that only the right people get the right vote. Yelton agrees with this practice and supports oppressive voting rules that keep various populations out of the polls. Oh, and he’s super racist about it.

If you haven’t seen the video, it’s worth a watch. So click here for that. Don’t worry, we’ll wait. (and if someone wants to teach me how to embed Daily Show clips on WordPress, there’s a bright and shiny oatmeal raisin cookie in it for you!)

So yeah. I watched that video and as you might expect, I was pissed.

That guy was so phoning it in! Sure, he trotted out uncomfortably bigoted phrases like “one of my best friends is black,” and “lazy blacks,” and “we call them negroes,” and yes, he even dropped the n-word a couple of times. Good for him, but he left so many great phrases out!

With just one more ounce of sticktoitiveness, Mr. Yelton could have done us the favor of saying words and phrases like:

With just one or two extra phrases, I could have totally won last night’s game of Unbelievably Dumb And Totally Cliched Right Wing Racist Things Bingo–a game I play weekly. PM me for deets on the next location.