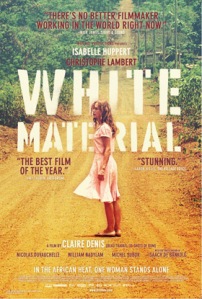 Can you buy it by the cord instead of just the yard?

inspiring, well-crafted and choc-o-block full of shots that reinforce your beliefs…especially the ones about how crappy it is to be black…if you’re even called upon to appear at all.

Things non-colors do in this movie: Speak ominously, stare longingly, remember their parents, pose a wicked threat, sit on a council, fill the streets of England, attend parties, use their now powerful and precise magic skills, speak out of turn,  ride a Pegasus, stake their claims.

Things of colors do in this movie: Do not appear.

Hmmm, I guess if you want to play Quiddich and have cool powers, the first thing you need to do is to make that nasty pigment problem disappear.

Things non-colors do in this movie: have adorable moments with their sons, look beautiful first thing in the morning,start a raid, raise suspicion, state the theme, provide expertise, act hapless with a gun, make a daring escape, defy the odds.

Things of colors do in the movie: Arrest the heroine, stand in the background.

And for you limited-release film fans, there’s:

Things non-colors do in this movie: Speak snappily, be snarky to the opposite sex, sew, create a leader, be a leader, serve orange juice to their families, use sex to make a point, be the prime minister, have a dog, put their families in danger, ride bikes, win over their husbands, put their feet down, give fantastic soundbites.

Things of-colors do in this movie: N/A

White Material: How Could I Walk Away from This Title??

Things non-colors do in this movie: dance like nobody’s watching, speak French, warn of impending doom, insist on perfection, save a man from being speared to death, have awesome tattoos, need to rescue their son,

Things of-colors do in this movie: carry rifles, put a rifle in a woman’s face and demand money, aim spears at a sleeping man, hide in shadows, smell a white lady’s hair, start some sort of rioting,

Some people will say something along the lines of: “Of course there aren’t any black people in these movies. It’s not realistic to drop some of colors in the middle of Hogwarts or Irishy NYC neighborhoods or in 1968.” And I guess that makes sense. Flying horses, wizard boys and women who look 100% amazing 100% of the time are all way more realistic than an of color of note. These are movies after all, not total make believe.