I’ll be honest. Even with the New England snobbery, the affinity for Brooks Brothers and his disdain for the brown, I’ve yet to find much use for Mitt Romney.

But then he was outed…as a dressage enthusiast!!

Yes, there may be some sticky issues with the fact that he was able to write off upwards of $70,000 on his taxes for his pretty ponies while many of us will never ever make upwards of $70,000 in a whole year, but…but…but… DRESSAGE PONIES! One of the hallmarks of Oreodom and animals which I truly love and adore.

The Atlantic Wire wrote this week that it was Perfectly OK to Make Fun of Ann Romney’s Weird Horse Sport.

Sigh. If you want to ridicule Ann Romney for something animal-related, It’s Perfectly OK to Make Fun of Ann Romney’s Weird Bird Shirt instead.

If you’re saying yourself, “That bird shirt is so not worth $900,” then you clearly don’t know fashion

Dressage, while a very specific exercise that involves using nearly invisible movements of your hands, calves, ankles and thighs to make your horse cycle through a variety of gaits in time to lovely music that you’ve chosen, is definitely not the weirdest of sports. Plus you get to wear an awesome hat.

If you’re saying to yourself, “That hat is so not worth $300,” you clearly hate animals.

There are plenty of sports dumber than dressage. Like these!

Football – wherein a bunch of men are encouraged to be obese so that they can fall down on top of other men top stop them from stopping some other guys from running away with a relatively small object called a ball that is in a completely different shape than every other ball ever.

Golf – wherein they should bring back the old-style breeches because those pants at least make sense while it makes no sense to use a thin stick to try and hit a tiny ball into a hole that you can’t even see.

Basketball – wherein giants make squeaky noises with their feet while sharing ownership of a bright orange ball as they try to put it into a web of netting with the bottom missing. No baskets are involved in the sport. Also, points rack up quickly and very high – suggesting this is too easy of an exercise.

Soccer – wherein extraordinarily attractive bodies pretend to be injured  so they can stop the incessant running and get a moment or two of peace during a game that goes on for hours and hours with the very real possibility of having no points scored–suggesting this is too difficult of an exercise.

Beach Volleyball – wherein people use competition as an excuse to take off many of their clothes. Show-offs.

Now compare those silly pursuits to the fine art of dressage! In dressage, you and your mount keep time with music. Plus it’s perfectly okay to use the word “mount” to refer to the thing between your legs and no one can say you’re just being gratuitous. You obsess about your extensions are correct and you get to braid your horse’s hair into pretty shapes…

…Wait a minute… Dancing? Extensions?! Cornrows?!? Maybe dressage isn’t the safe haven I thought it was. 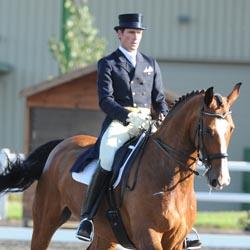 Do you play any of the ridiculous sports listed above? What do you like about said sort? Let us know in the comments!

Not sure what sport is right for you? Click here to find out!

Team sports are actually a struggle for this Oreo. Find out why here!

Embrace it! Awkward moments are good for you!

I was taking a turn about the Equestrian Center after riding today when I had an experience that definitely made me take stock in my Oreodom.

I was nearly of the gate and back to my car when an older man rode up to me in his golf cart and asked what I was doing there.

To be fair, there was a competition going on so most of the people there were in formal riding gear, though I had hoped my jodhpurs would have helped me blend in a bit.

I told him I was just there to watch, he informed me that he was the show vet and we started a lovely conversation about big animal care, James Harriet and our favorite places in Ireland and West Hollywood. Then, my new friend said this to me:

“There’s another colored gal who has a horse up here…do you know her?”

Now, while I’m sure the gal was at the last meeting, I didn’t know who he was talking about and I told him so.

At first, I forgot my Oreoness and was a little put off by having been called colored. But then, my Oreo senses kicked in and I decided to chart it out and see how I should feel…

CON: Even with the jodhpurs and tightly-pinned bun, he still noticed I was black.

PRO: Though he noticed I was black, he still talked freely to me, suggesting that he didn’t think I was angry RBP.

CON: He made the small circle of people around us uncomfortable, as they all did quick side glances at me to see how I would react.

PRO: My Oreo-sense allowed me to put everyone else at ease by responding sweetly and without malice to his thoughtful inquiry.

CON: Getting away with saying it once made him say it again and more when he added: “Oh yeah, and there’s this other colored fellow who owns a couple of horses down the way. I mean, I think he’s a black guy, he’s really, you know, dark like you are.” Equal amounts of uncomfyness followed.

PRO: Each time he said an adjective that described the hue of my skin, it made my back stiffen straighter and straighter–which made my my posture much better for my next riding lesson.

His questions also made it clear that there are other Oreos nearby…if any of you are reading this, let me know you’re out there and we’ll grab a scone or something.

What’s the most uncomfortable thing someone’s asked you in public? How did you respond? Let us know in the comments!