The phrase “you remind me of _____” is a tricky one. On one hand, you could be setting someone up for a spectacular compliment. Or you could be about to insult them royally. I think I experienced both this weekend.

I was chatting with someone I had just met and he said “Do you know who you remind me of?”

I crossed my fingers hoping he’d say Julie Andrews (she’s delightfully playful and silly and sing like the Dickens!) or Erica Jong (feisty, smart, feministy–I’ll take that) or Tina Fey ( I think I write like her…just whiter).

But he said none of those people.

Instead he said:  “You know the girl who played Angela on Boy Meets World…?”

I do know the girl who played Angela on Boy Meets World. That was my favorite show as a tween. It was party of ABC’s TGIF lineup and since I wasn’t doing things like going out or having friends over on Friday nights (because I was …um…just soooo popular that it was impossible to pick….um..yeah…) I watched a lot of TV. The actress who played Angela is Trina McGee and I loved her because she was a total Oreo! She was in an interracial relationship with the troubled best friend of the main character and had no friend of color to speak of. She was an inspiration and hero.

What she wasn’t, was someone who looks anything like me.

Here is a picture of me right now and  basically how I looked that night. 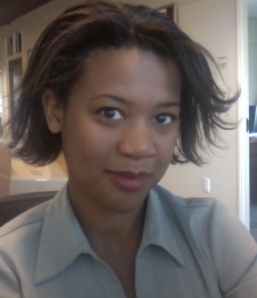 Here are some pictures of Trina McGee. 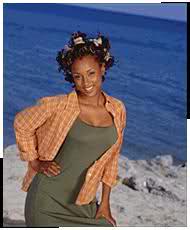 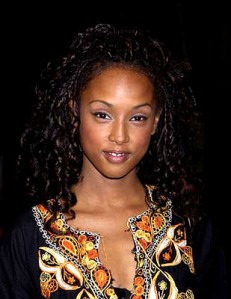 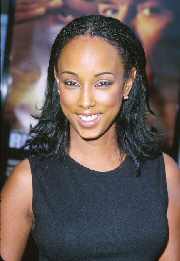 I have: a round face, short hair, round nose, hidden cheekbones.

She has: a long face, long hair, slender nose and a relatively defined bone structure.

Hmmm, I wonder what he thought we had in common.

I bet it was our pluck. It’s usually the pluck.

Who do people say you look like? Do you agree with them? And do you like it?