Gays: In case you were thinking that the dismantling of Don’t Ask Don’t Tell was a good idea in that will allow more people to feel free to express themselves without fear of reproach in their chosen career, think about the consequences! If you all of a sudden suggest that people should stop repressing themselves just for the comfort of those around them, be ready to be ridiculed. If you aren’t holding it in with all of your might…you know what you might turn into.

Consider this: The Florida Family Planning Council, a conservative Christian group in Jeb’s state, recently released a newsletter to its followers featuring this picture.

Lesbians, per the FFPC

The picture was printed with a story about an evil judge who ripped some poor, defenseless orphan out of the potentially endless and often dangerous cycle of foster care and handed it over to lesbians to be loved and raised in a stable and nurturing environment. The caption in the newsletter identified one of the people pictured as one of the new moms and sent ripples of fear through the folks who read the newsletter.

After all, how dare a judge put a child in a home with ladies who are not only gay, but, you know, really really gay.

Turns out, however, that this is a picture of the actual couple: 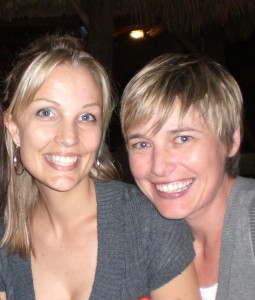 The FFPC asserted that they accidentally ran the wrong photo and issued a quasi-pology in the comments section of a Florida reporter’s column.

The FFPC is an organization that successfully lobbies local governments for changes to laws. This is a group made up of educated, professional people including many lawyers and doctors. They write articles, they draft letters, they blog and design web pages. They have been around for eight years. They know a whole lot about the life cycle of a fetus and have memorized tomes of religious text. Per all the photos on their website, they know how to exclude people of color from an organization in a state with a minority population of almost 40 percent– 6 percentage points higher than the rest of the country.  They know the ins and outs of the judicial system and can organize a great big gathering in a pinch. So, really, they don’t have the know-how to check a photo for accuracy?

Of course they do! Which makes the fact that they chose not to even more genius! They knew that lesbians who looked like “lesbians” were way scarier than you know….lesbians. Especially when you consider that the President of the organization said that none of his readers complained about the printing error.

So, ladies, don’t run the risk of that bob being too short.  Comfort the rest of the world by growing that hair out and buying shirts that minimize those shoulders. We can go get your highlights while I touch up my relaxer!