A lot of people were concerned this week when the Red Cross, an organization dedicated to public health initiatives and to building at least one house in Haiti, was found to have produced this public safety announcement. 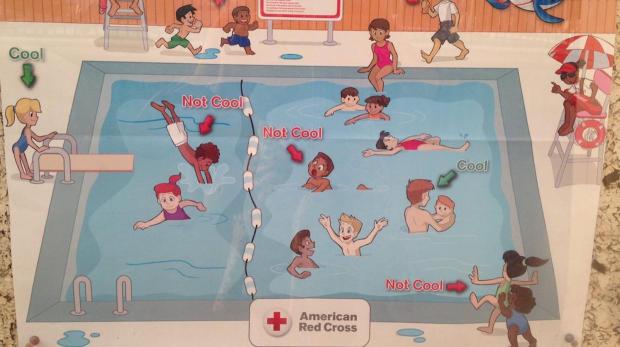 Curious as to what the problem was?

The poster’s goal is to show kids that there are 2 types of behaviour at a public pool. There’s “cool” behaviour such as waiting for the diving board like a little debutant stretching a hamstring before the talent portion of the competition. And there’s “uncool” behaviour like well, according to this poster, being brown.

Red Cross ended up apologizing and asking that pools who hung up the poster take it down immediately.

Look, is the Red Cross racist? Probably not. I mean, they built that nice singular house for all those people in Haiti. A racist wouldn’t do something like that. Let’s not get overly PC about this.

Casting choices aside, there are actually plenty of things to be offended by in this picture, though. And these issues deserve all the Twitter outrage.

They’re not allowed to join a union.

They’ve worked there forever. They’ve saved lives. And when they asked their boss about some organization to their organization, their boss hung up a  memo that was all: “We’ve committed to you, we expect the same kind of commitment from you. Just as we didn’t ask you to sign contracts preventing you from taking freelance pool work, we’d like to ask you not to ask us sign something that will make it difficult for us to continue our working relationship.”

Three words: They. Still. Use. Chlorine.

Have they never heard of salt water? It’s like they don’t even care about the planet or saving money on maintenance.

That cool dad with his baby

He has to pay alimony to his ex-wife indefinitely because even though she makes more money than he does, her income is mostly off the books, so no one can prove a thing.

That dolphin sitting on the fence.

She didn’t get paid for a speaking role because someone else provided the voice balloon copy which technically means that dolphin didn’t speak. This a technicality that allows Big Pamphlet to continue to profit while working class artists suffer.

That pair of interracial synchronized swimmers

She makes like 15% less than he does for the same effort. And they have the same agent. And she won’t listen to any of us when we’re like “you need new representation. Your partner should be standing up for you!!” She’s always like “but I just love the craft. It’s not about the money.” And we’re like “yeah, but your student loans!” And she’s always “You just need to meet him.” And then we’re like “Whatever. Well, we’ll be here for you when you change your mind but for now, we don’t know how to be supportive of this. Doesn’t mean we’re not friends. In fact, it means we’re better friends than he is.”

Frankly, the racial profiling is the worst of this poster’s problem.

What do you think? How does this poster hurt your feelings? Let us know in the comments!

Leave a comment here or at any of the above and let us know what  you think!