I Get Way Too Emotional at Too Many Movies

I’m not shy to admit to some of the… less refined films that I enjoy.

Two Weeks Notice will always get me out of a funk. Zoolander makes me melt. I’m pretty sure that My Best Friends’ Wedding did something silly like “make me believe in love again.” I recently paid more than I should have to download my own personal copy of The Core. And this VHS copy of the operetta Amahl and the Night Visitors is a holiday must see for me! 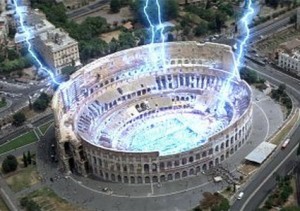 That's right! THIS happens in The Core. Thanks to the stopped rotation of the Earth's core, a lightning storm turns the STONE Colisuem into a giant electrical conductor!! How can you not love a film with balls like that!

There’s something to be said for bad movies. They’re like old old friends who keep you company. Your favorite lines become inside jokes and you always know what to expect. In that way, they’re not really bad at all. They may not be good, but they’re good to you. It’s like a functionally codependent relationship without the having to explain why you still haven’t broken up to your friends who roll their eyes whenever they see you together.

I’m not saying that I’m adding the movie I watched this weekend to the bad=good list. But I am saying that I got that little knot in my gut that happens when I care about what’s going on on screen.

For various reasons, including a very serious food coma that rendered me unable to do much else besides lay there and take it, I found myself putting a copy of Disney’s 1993 inspiring sports movie Cool Runnings.

You remember this movie, right? Jamaican bobsled team led by John Candy to Olympic fame and stardom? Lots of bright colors, dreds and exclamations of “Ya Mon!”

This movie should not have made me cry!

And it totally did.

After lots and lots of setbacks and victories, the Jamaican team is finally in a place where they, with their small amount of experience, big hearts and rickety bobsleigh might actually win this thing!! They’ve won over the hearts and minds of the originally-skeptical crowd. They’ve made their parents love them again. The whole of Jamaica (or at least the whole of this one bar in Jamaica) is waiting with held and baited breath to see what happens when the four men get into their bobsled for one. Last. Race.

And then the unthinkable happens.

As they race around the track at breakneck speeds, their sled pops a screw and breaks. It slams into the wall of the track, flips onto its side and drags the helpless Jamaicans across the hard, unfeeling ice before running out of steam and into a wall.

That’s also when TheOreoExperience realizes she has tears in her eyes.

I also realize I have a cat in my bed staring me in the face wondering why I'm crying and why she hasn't been fed in the last five minutes. She doesn't look like this, but has kind of the same terrifyingly intense look.

I KNOW what’s going to happen. I KNOW that everyone’s gonna be okay. You’re not just gonna murder your four main characters and roll the credits at the end of a Disney family film.

But it still got me.

The shot lasts just long enough to make you think that Disney is about to betray the eff out of your relationship with them and make these guys not be okay. There’s a shot of the finish line that shows that they were so so so close to what they thought they wanted. And there’s a slow clap when they stand up and walk their sled across the line.

A part of me slow-clapped, too. (At least on the inside)

To the actors for bringing emotion enough to their faces and voices to off set 89 other minutes of “Ya Mon!” and “Kiss my lucky egg!” To the director for wrangling a moment of real feeling in an easy-to-phone-in family film. And to the writer for crafting the world in the first place. And to humanity for being moved by moments like this at all. (The film made $70 million, which back in ’93, was, I think, pretty good. At any rate, it made 4 times its money back)

The awful truth is that I’m all squishy on the inside, terribly romantic and really love that writing words down and/or putting them up on screen can make people feel anything at all. It’s kind of a neat gift and one I am very thankful for being able to do and experience.

That or that food coma was more intense than I thought and this was all part of some insulin-crash-inspired third-life crisis.

So, apologies to any future progeny** for getting all teary at Hotel for Dogs 6 and waxing poetic about its implications on the wonderfulness of the human condition.

** For the record, I am not expecting any progeny now… possibly ever. Carrying around a tiny creature that poops inside of you? No thank you!