I just read a book should be required reading. I’m going to go out on a limb and say that it’s as crucial as the classics, as informative as an encyclopedia and as page-turning as [insert name of popular graphic novel franchise here].

I’m talking about The Game – the expose into the society of Pick Up Artists by Neil Strauss.

Fresh off the heels of something disappointing with some dude, a good friend told me to read it. This is a friend who lives by the “rules” of dating. I don’t have time to wait X number of days to call someone or not return emails so as to appear “unavailable” and I kinda like the ol’ ones and twos too much to sport a fake chastity belt so that Mr. RightAfterIFinishWatchingModernFamilyIt’sAReallyGoodShow!! thinks that I’m a good mother-virgin-whore. So when she suggested I read this book, I was reticent to do so.

Listen, Phil. I know you're married...and not real. But you know, if anything changes... I'll be right here

If you haven’t read it, here’s the sitch: The book follows the author as he descends into the world of Pickup Artistry. Basically, these dudes get together and perfect elaborate games, schemes and tricks to make women sleep with them. They keep score, they try to “sarge” as many “two and three sets” as possible while “pea-cocking” at clubs. There’s a whole lingo and costumes and general douchebaggery. 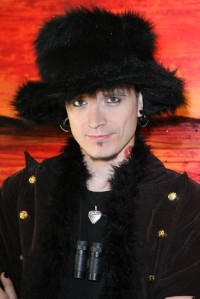 This is one of the "masters" of the art of pick up. He gets girls. Lots of them. And they let him touch them. Ah well, everyone has a type, I guess, right?

The worst part of the story is that the tricks seem to work. Hot women fall for this madness and make life more difficult for regular looking heady girls like.. um.. you know, no one in particular.

One of the favorite tricks goes like this: Step One: Find a woman you’re interested in talking to. Step Two: Insult her. She will feel the need to defend her honor to you and will then suck up to you to prove to you that she’s not mean/ugly/smelly/needy/bitchy/boring or whatever it is you told her she was. Step 3: Show here where you keep your meat and two veg.

Though idk why women would be insecure. Not like this is part of the beauty standard or anything. Also heehee, you can see her buns!!!

There’s also a bunch of stuff about hypnotizing people on the spot and duping girls into threesomes by pretending you know fuck all about Eastern massage techniques.

I read the book, fascinated by its exploration of hubris and pathos and certain that no regular person would ever think that this was the way to try and relate to other human beings.

And then I started paying attention to the way strangers talked to me.

And then I wanted to weep for all of mankind.

I don’t know that the three men I’m about to describe were actually and actively trying to hit on me. And maybe they really did just want me to go away. But there was something about the cavalier way that they were so super rude that it made me think they might believe this is how you’re supposed to talk to people.

A few nights ago, I was at a networking event. I was meant to meet someone there and they hadn’t arrived, so I was standing there feeling very awkward and trying not to look like it. I remembered one thing that the book DID suggest that is actually just helpful for starting conversations with strangers in general.

It described the benefit of greeting strangers with something other than “hey, what’s your name?” That is a boring way to start a conversation and makes people feel like you’re going to stand there forever and chat them up. Instead, they suggest, start with either a fun question about the event/picture you’re both looking at/drink you’re both drinking, etc. Or to ask them a question that they might be able to answer. This changes the interaction from interview to conversation immediately.

I approached a couple of guys and asked if they knew the host of the party. We were all invited via email list and didn’t know the guy throwing the shindig personally. They said they didn’t and we joked about how he might be a ninja or a wraith or some sort of rogue operative. It was fun and light and everyone was having a perfectly good time.

I asked the guys what they did. It was an industry networking event, after all, and so questions about the industry should be expected.

“Ugh!” one of the guys said. “I hate that question. It’s so fake and LA. I always ask ‘what do you do creeeeativelyyyyyyy?’ That’s way better.”

“Oh, I said. Well, it was great meeting you, then.” And I turned and walked away.

About 45 seconds later, I found myself at the beginning of another conversation. This time with a photographer. We got to talking about models and photoshopping and I said something about feminism and photography and he said:

“Well, if you’re such a feminist, then why are you wearing a short skirt?”

“I’m wearing this because I like it,” I snapped back. “I think it’s cute and fun and it’s comfortable. And, it was nice meeting you.”

And I turned and walked away.

That night I checked out ye olde dating profile (I really should take an effing break from that shiz) and someone messaged me and said that he just couldn’t understand why that was my favorite movie. It’s just so maudlin and over the top and dull.

Though he did get points for using the word maudlin, I was like: “What’s with all the insults??”

There’s a huge difference between saying “I hear there’s some contention in feminist circles over traditionally “girlie” clothing. What do you think about that?” And an accusation of being a liar.

If you’re taking the time to email me via my dating profile, why tell me that my fave movie is stupid?

And even if the weird black girl is hurting your game with the models (and oh, there were models) who I’m positive were just waiting to rip your pants off, why be a dick about it?

Conversation is not a competition.

And Sunset Boulevard is an excellent film.

Does being a jerk at first blush really ingratiate you to most of the population?

What do you think of the rules? Do you play by them? How’s that going? Let us know in the comments!