It’s an interesting day in science when people who are naturally and easily friendly are considered to be deficient. 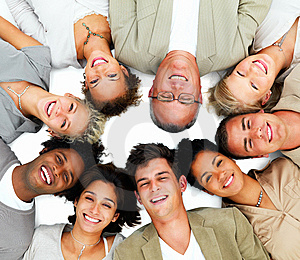 Everyone getting along? Better get to a doctor!

People with Williams Syndrome are these people.

Williams Syndrome sufferers(?) do not experience social fears that ‘normal’ people do and they make friends much faster than the ‘healthy.’

They’re also not racist. So says researcher Andreia Santos from the University of Heidelberg.

Typically, children start overtly gravitating towards their own ethnic groups from the tender age of three. Groups of people from all over the globe and all sorts of cultures show these biases. Even autistic children, who can have severe difficulties with social relationships, show signs of racial stereotypes. But Santos says that the Williams syndrome kids are the first group of humans devoid of such racial bias, although, as we’ll see, not everyone agrees.

Her experiments consisted of showing children with Williams Syndrome pictures of black people and white people and recording their reactions.

The typical children showed a strong tendency to view light-skinned people well and dark-skinned people poorly. Out of their responses, 83% were consistent with a pro-white bias. In contrast, the children with Williams syndrome only showed such responses 64% of the time, which wasn’t significantly different from chance.

So, if you find yourself totally comfortable with new hires Dwayne and Lakeshia, check yourself. You might be nice…and sick.