We’ve talked about it briefly before, but is there a term for a gay person who hopes to be seen as straight? 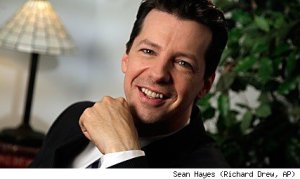 Hmm, charming, attractive and talented? Yeah, I definitely don't want this guy pretending to be after me!

The inspiration for discovering this term comes to us courtesy of Newsweek’s Ramin Setoodeh, an openly gay man in the media who writes that gay actors shouldn’t play straight people. He criticizes Sean Hayes and his current performance on Broadway in Promises, Promises and Jonathan Groff who plays a straight guy on Glee.

He says that neither of these guys’ performances are believable because they are, irl, gay dudes.

Thank you for the head’s up, Ramin. And thanks for sending more would-be’s to the self loathing fold!

Nothing’s going to freak out some up and coming young actors more than hearing that because of who they are, they should be prohibited from accepting the vast majority of roles in film and television. I can almost hear the collective cry from kids who haven’t come out yet (and thanks to you, sir, might never get around to breathing that sigh of relief) in theater arts departments all over the country.

Picture it with me! Scores of young men are now criticizing every syllable they utter–was that a near lisp, they’ll think, or did I just stutter? They will watch their feet as they walk to make sure there’s no hint of a super gay sashay…but what if they’re just side stepping to avoid their own tears? Oh well, better man up!  Otherwise, there will be a critic like Ramin to remind them that as gay folk, they’re just not good enough.

It’s a good thing that Ramin hasn’t noticed how  highly trained and experienced actors go through years and years of practice and preparation to erase biases they may bring to a character. Or that he overlooked the fact that straight actors play gay, that back in the day men played women. And no one tell him that Idina Menzel is not really a green witch, that David Hasslehoff is not really a mad scientist capable of creating a serum that can split a person’s personality into two distinct halves, that Josh Brolin is not George W. Bush and that Cate Blanchette is not John Lennon.

And why leave out the lesbians? Ramin cites a couple of guys in his piece, but doesn’t seem to think that

Sometimes masks fit so well, why bother taking them off, huh Ramin?

Lesbians playing not-lesbians is a apparently not a problem. Poor ladies, why let them get away with being okay with themselves. C’mon, Ramin, without adding the gals to the you-should-self-hate list, it’s like some sort of weird affirmative action program. And we all know how horrible those are.

So what is the Oreo version of the straight gay? If an Oreo is someone who is black on the outside, but white on the inside, what’s the word for someone who’s actually gay, but presents as a socially acceptable breeder? Spaghetti squash? Testicle? (c’mon, the latter–they’re basically smoothish on the outside and inside filled with, well, lots of not straight biological tubing)

And what do you think? Should actors have to put height, weight, training and sexual preference on their head shots?

Leave a Reply to B. Durbin Cancel reply