Not at all, friends. Like with any one night stand, I took precautions.

This definitely helped offset the high ratio of color to Caucasian in the theater.

Then during intermission, I realized: this situation was not as dire as I thought! August Wilson was the son of a black woman and a white man. Not just white, German in fact. Upon this realization, I breathed a sigh of relief and enjoyed the rest of the show.

To celebrate, I’ve listed some other things that are not nearly as dangerous as they seem, plus how they can benefit anyone looking to hide from who they are.

The fake danger: With half a dozen eyes, a crispy exoskeleton, giant pincers and a tail that means business, scorpions are as terrifying looking as a rerun of Tyler Perry’s House of Payne. But it turns out it’s all looks. These tiny horrors are nearly blind and have only a very mild venom. Getting stung by one is only about as harmful as getting stung by a bee.

The Oreo Upshot:
Even better than the fact that scorpions can’t really hurt you is that they are found in places where people of color are not: remote desert campsites, historic Victorian homes and exotic pet stores.

So if you as a person of color do have the fortune to be stung by a scorpion, wear that injury proudly. It shows that you are hanging out where you should be.

Swine Flu
The fake danger: Despite a handful of deaths and promotable nicknames like “Hamthrax” and “Snoutbreak,” the feared

Swine flu is not really all that bad. Some experts are saying that it is in fact much less severe than the yearly regular flu outbreaks and the CDC is considering changing the definition of ‘pandemic’ to accommodate the general unseriousness of Swine Flu.

The Oreo Upshot:
Initial Swine Flu cases were coming out of Mexico. Should you come down with fever, chills and diarrhea, just show off your pics from the white sandy beaches of Cancun with the other white sandy patrons and anyone who was afraid of your symptoms will be delighted that they can reminisce with you about how fun it was to have drinks served to them by brown locals whose hovel homes are hidden by the American based hotel chains who give you decent rates by refusing the natives a living wage. 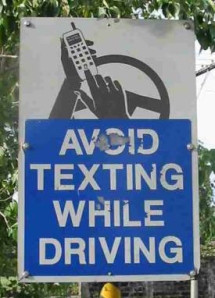 The fake danger:
Sure there is an accident or two more now than there were pre iPhone, but the frustration incurred by not answering text messages while avoiding pedestrians on the on ramp is the real danger. Gen Y is accustomed to getting what we want when we want it. Even if we want it while operating a 2,000 pound thing that can kill an innocent on contact.

If we don’t keep our hands at 4 and 8 on our phones and not at 10 and 2 on the wheel, how can we tell our dinner date we’re running late, passively aggressively avoid our parents with a digital birthday greeting or find out if the object of our affection texted us back yet…no? how about now?…Now?  NOW?!?

Don’t think of it as creating an accident by being visually distracted, think of it as avoiding the death of our self-esteem, which is way more important than that guy selling roses and oranges by the side of the road who we just grazed.

The Oreo Upshot
Everyone has a cell phone, so that’s not going to make you stand out. But if you can get someone to call you to trigger your Grateful Dead ring tone while the cops are finishing your accident report, so much the better!

That’s right, chess fans. What was once seen as a problem move in the trusted Najdorf Variation of the Sicilian Defense, is playable after all. Thank to the continued efforts of the folks at Rybka, there are many solutions this seeming stalemate of a move. Including of course, but not limited to: 10. h6, 11. Bh4 dxe5, 12. fxe5 (alt: 12 wfd7).

The Oreo Upshot:
If you understood any of that, you have Oreo points for life, even if you do decide to watch an episode of House of Payne.