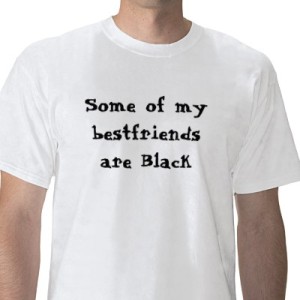 Sometimes, though they will be impressed with the progress you are making as an Oreo, non-colors will be confused. They’ll look at your burning pile of Ella Fitzgerald records and say something “Do you really need to try so hard to hide? I mean, c’mon, we have a black President.”

The phrase “We have a black President,” seems to be the new “C’mon, some of my best friends are black.”

People will use the phrase to justify anything from encouraging you to accept their present of Jay-Z tickets to being fairly openly racist.

Variations of this phrase include,

It may be tempting to point to statics that show that having a black President has done little so far to change the demographics of the inner city working poor or improve the conditions at under funded schools. But doing so will cause you to be seen as an RBP, so stuff it or be ready to be considered the affirmative action slip up.

The better choice is to run a polishing rag over your Young Republicans pin and say “you’re right. Things are different now.”

And be on the look out for other variations on this theme.

Usually said in response to: A sigh or lament at the fact that most criminals on police procedurals who kill with some sort of complicated and almost understandable emotion are white; and most killers who simply boast of blowing some kid, businessman or prostitute away with no remorse or sense of self-control are of color.

Usually said in response to: A lament at the fact that film canon about the Holocaust consists of well made movies that show all kinds of emotion, storytelling and filmmaking prowess while movies made about America’s holocaust, slavery, are relegated to maudlin TV movies and show slaves falling in love with their horrifically abusive masters while ignoring stories about how male slaves were regularly castrated sans sedatives, how lots of what we know about gynecology today came from living experiments on female slaves or that the American slave trade was kept going for 50 years after international slave trading was outlawed by slave owners who kept female slaves like breeding cows.

Usually Said in Response To: Walking out of Avatar and thinking, “isn’t this Dance with Wolves or The Last Samurai just with aliens and a bazillion dollars of special effects instead of minorities. I’m not saying it’s a white guilt allegory, but maybe.”

Proper Oreo Response: You’re Right. Learning one of the most complicated linguistic systems ever known (DWW/AVA), mastering an art in a few months that people have literally spent their whole lives perfecting (AVA/TLS) and being the white love savior for a poor indentured native girl (DWW/AVA) is more than reasonable.

Learn these conversations and soon you may hear something like “You do play squash, right? You should join my league, we meet on Saturday.”

Proper Oreo Response: I’ll be there with bells on.