To ring out the old year, MSNBC’s Melissa Harris-Perry hosted a humour segment on her show where comedians and panelists poked fun at the news of the day.

Unfortunately, they also poked fun at the Romney’s. More specifically, she made a coupla jokes about the newest, youngest, not-whitest Romney – the adopted baby boy Kieran Romney. 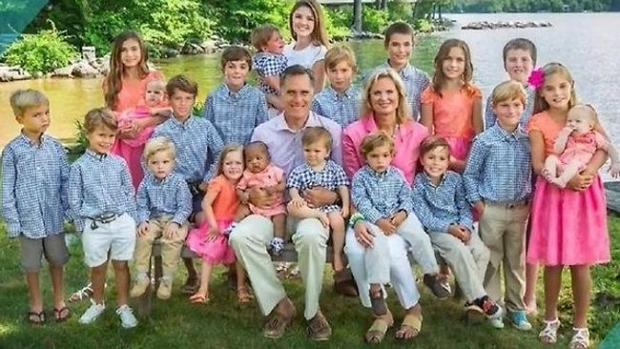 Sad to see that Rafalca didn’t make the holiday card

Seeing this picture, Harris Perry commented that “one of these things is not like the other” and that it would be totes adorbs to see Kieran and North West join forces.

A few days after that, and after some backlash, she started her broadcast with a the following statement that made my jaw hit the floor.  Just look at the video below.

I’m confused as to why she would call that an apology. I’ve followed lots of news stories about verbal faux pas – from Megyn “Are there are too many y’s in my name?” Kelly’s comment that kids should just accept that Santa and Jesus were white, to Phil “I’m Actually Quite Preppy, But Grew This Beard for Duck Dynasty” Robertson’s announcement that gay people were the same as terrorists, to Todd “A Woman’s Body Has a Way of Shutting that Whole Thing Down” Akin and what Harris Perry gave was not an apology.

A real high-profile apology has within it the following sub-pologies. In order to smooth out any waves made by what you said, you first need to:

Apologize for other people not having a sense of humor.
When Megyn Kelly took a moment to chastise people who would like to see Santas of various colors and creeds by saying that while Santa can live in an ice desert and fly through the air in a vehicle pulled by cloven hooved magicals, he definitely, definitely cannot be anything but white, she followed it up a week later by saying that she was definitely sorry…that no one got that she was making a really funny joke. Any hurt feelings or sense of cultural dismissal was only felt because brown people are too dumb to get what’s funny about insisting that we experience a white, very white, and only white, Christmas.

Apologize for other people not being able to understand excellent songwriting.
Earlier this year, singer Rick Ross came under fire for including the following lyrics in a song:

While  the linguistic arrangement of the worse “ain’t” and “even know it” gives me night terrors, the message is also concerning. Basically, Ross is singing about drugging a girl and having a good, enjoyable sex with her unconscious body.

When he apologized, Ross made sure to mention that any offense is listener’s fault. He didn’t use the word any variation of the words “sexual assault” in the lyrics after all, so why on earth would anyone think that’s what he’s talking about.

“I would never use the term rape in my records… I want to make sure this is clear, that woman is the most precious gift known to man. It was a misunderstanding with a lyric, a misinterpretation where the term rape wasn’t used.

Apologize for other people not getting what a super awesome team leader you are.
In March, the founder of  yoga pants company Lululemon got into hot water when he responded to customer complaints that his company’s  yoga pants were too sheer. Instead of re-jiggering the manufacturing, he instead stated that the problem had nothing to do with the child slaves who make the unnecessarily expensive  yoga pants and everything to do with the fact that women’s thighs sometimes touch.

Later, he posted an apology video on youtube where he got teary eyed and apologized to his team members for having to listen to people complain about their product and for all those whiney pants not understanding what an amazing culture has been built up at Lululemon.

Apologize for other people’s inability to stand up for 1st Amendment rights.
A few weeks ago, Duck Dynasty’s patriarch angered lots of people by saying that gay guys just don’t get how awesome vaginas are and that it’s just a step or two from being gay to having sex with animals. Shortly thereafter, he was put on hiatus from his show.

DD supporters lost each and every one of their mind and said that he was being discriminated against because people should be able to say whatever they want with no consequences because First Amendment!

And…obviously. Our constitution clearly protects people from their own issues by putting in safeguards like the 1st Ammend. So go ahead and call your boss a beslubbering beef-witted cunt and when you’re subsequently fired, sue the shit out of them.

Apologize for other people not being down with your own personal version of god.
Included in the outrage over Phil Robertson’s week-long hiatus from the reality show that has exploited faux Southern culture and made him a bazillionaire (another inalienable American right), was the fact that Phil was being persecuted for expressing his religious beliefs.

Said Robertson: All I did was quote from the Scriptures, but they just didn’t know it.”

Why let a little thing like separation of church and state get in between you and a good publicity stunt.

Here’s a resolution for Ms. HP – learn to say you’re sorry in a way that lets us know what you really mean.

Who else is really good at apologizing? What’s something you’re not all that sorry for? Let us know in the comments!