For Valentine’s Day, i I thought I’d tell some fun dating stories. Some good, some not as good. And I thought I’d make it interesting.

As an Oreo, if I’m on a date now, you can be pretty sure it’s not with a black guy. But that wasn’t always the case. True enough, I’ve never had a black boyfriend, but that doesn’t mean that once or twice, I didn’t dip my toe in the water. The cold, cold water.

Below are some dating stories, names of course withheld to protect…me from retribution. 🙂

See if you can guess the guy’s race. Answers are below.

1. 1 + 1 = 2 dates that didn’t go anywhere.  The fact that when I was young, I had crushes on Ferdinand the Friendly Bull, Lambert the Sheepish Lion, Valcor the Luck Dragon and Jesus demonstrates that I have always been drawn to squishy, emotional, sweet, artistic guys who like to tell stories and hug. 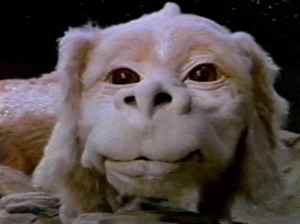 I will always hold a candle for you, Mr. F.

But this one time, I decided to break that mold by going out with a rough and tumble, snowboarding accountant.

He made reservations at an adorable Spanish restaurant, showed up smelling delightful, bought a round of wine before dinner, ordered a ton of apps and plied me with three or four martinis without once not being a perfect gentleman. He told me stories about his work that actually made accounting seem exciting, took me to the movies the next week…then never called again.

So what do you think? White guy or black guy?

2. Prohibition. Dinner was at one of my favorite LA eateries: Cole’s. Cole’s is a mahogany and maroon French Dip place steeped in history and that serves an amazing Manhattan. We had dinner there, then snuck into the speakeasy in the back for a couple of fancy drinks in old tymey atmosphere.

Say fella, don’t get in a lather, take a guess on what this dude looked like or go chase yourself!

3. Montage. This one was seriously like something out of a movie. We met at a party. Couple weeks later, he said that he had a day planned and that I needed to bring a couple of changes of clothes. Now, I normally am not a fan of surprises–a lot of pressure to have the right reaction to questionable stimulus.

No, really! I love that you redecorated my apartment in a totally new color scheme and bought me a Doberman!

But this date was full of great surprises! I drove to his place by the water. He drove us to a Soul Food place, but then quickly made up for that infraction by taking us to more anglo-tastic spots like an airplane museum, a surfing lesson and a beach-side cantina. We fell asleep watching a movie on his couch and the only reason we didn’t end the night…differently…was b/c the day before he had had surgery on his mouth. A week later, he left for France and never called again.

Opening this weekend! The answer to the nagging question…was he white or black??

4. A Classic Tragedy. We met at a bar where instead of bumping or grinding me, he told me that he loved Hemingway and The Secret of NIMH. He also told me that he wrote poetry and the next day, he invited me to come over and hear him read some. Here’s the thing about poetry, if you’re going to use it as a second impression, it better be pretty darn good. His…rhymed. He left to go home to Seattle the day after that ( I was living in Yakima, WA at the time). I told him I was going to be up in Seattle for a Shakespeare Festival. He said he would love to go.

On the drive up, I called him and mentioned I was hungry.

“Do you know the Space Needle,” he asked.

“Um…yeah!” I said, excited that I might get to eat lunch in a nice restaurant way up high.

“Great,” he answered. “There’s a McDonald’s right down the street. Let’s meet there.”

I thought maybe we’d meet there and go up to the Space Needle. Nope. We ate a McD’s. And went Dutch.

We went to the Shakes Fest and I was going to ask him if he was bored by the brilliant version of Troilus and Cressida we were watching. But I was unable, as he was sleeping. I tried to sneak away, but my steps woke him up in time for him to ask me if I wanted to spend the night at his place.

Who did I not shack up with that night? A white dude or a black one?

5. Comedy and Cocktails. The alway-suited son of a chef got VIP tix to a comedy show and then took us to a trendy Hollywood eatery for lots of yummy apps and a $35 shot of whisky that I still think about. After dinner, we snuggled at his place for about an hour before he dropped me off at my car….and then didn’t talk to me for a year.

It would be funny if it wasn’t the 3rd time in this quiz game. Who do you think did it this time?

1. WG. Though he did smoke a lot of weed and he liked hip hop.

2. WG. And I don’t know where there aren’t more people of color at this 1920’s nostalgia fest. Maybe because in the time when alcohol was illegal, racism wasn’t. Oh well, more Oreo points for me! 🙂

5. Trick question! This one was a half-black. By some accounts, that would make him an Oreo, but according to the Oreo FAQ, that’s just not the case. Either way…seriously, what’s up with the great dates followed by no follow up??

What are your fave date stories? Tell us in the comments! And for reals, if anyone can explain the radio silence phenomenon, I’d love to hear your thoughts.