The appearance ethnic athletes at the Olympics is not news in and of itself. We expect to see of colors there in some events: track and field, basketball, clean up crew. 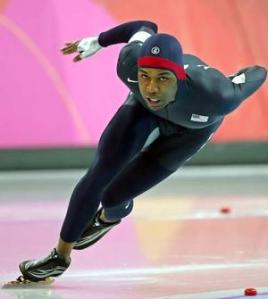 But this year, of color speed skater Shani Davis is winning medals and sporting his Oreo pride as one of only a handful of blackletes at the Winter Games. Here’s video of Davis setting a new world record (one of the eight he has set). Bonus points for this video being in Dutch!

In 2006, Davis became the first African American to win an individual gold medal at the Winter Olympics. And while media outlets and bloggers write stories about him with headlines like “Soul on Ice,” Davis is reticent to talk about his ethnicity and according to Yahoo!Sports, Davis only wants to be known as a skater, melanin levels, unimportant.

Fun fact: (if wikipedia is to be trusted). The character Frozone in Disney/Pixar’s The Incredibles was based on Davis. Hmm. Definite gold for Oreo-ing it up in Vancouver. But probably a bronze for having Sam Jackson voice him. What? Was Branaugh not free?

Chin up, old boy. You'll be in the picture next time, mate.